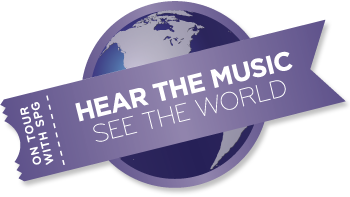 Starwood SPG is promoting their 2014 Music Tour with a chance to win an all-expense trip to one of their concerts and also $50 Ticketmaster cash codes.

There are 2 promotions in addition to the concerts.  Here's a summary:

You can buy tickets to the concerts with your SPG points at moments by SPG Auctions or you can win them in the contest.

Here's how to get them:

NOTE:  You MUST book using a mobile APP!  According to the terms and conditions, third party (including but not limited to travelocity.com, expedia.com and orbitz.com) or via spg.com are NOT considered eligible for this promotion.

You could win an all-expense paid trip to your choice of 1 of 9 global music events.

Note: Only one (1) unique Starwood Hotels & Resorts property per entry.

This is my shortened version, but read all the specifics starting with #7 in the terms and conditions — its a long list.  Most are obvious.

Three (3) winners will be selected, but only 1 person will win the grand prize — the all expense paid trip.  Here is what they are looking for:

Grand Prize: One (1) winner will receive a trip for 2 nights to one of the concerts (your choice).  This includes round trip economy flights for two, two nights hotel stay, two concert tickets.  Approximate Retail Value up to $5,000

I would choose purely based on location — either Dubai, Argentina, or China.  Which would you choose if you won?